Background and Purpose: Climate change is possibly the biggest 21st century challenge for the European forestry. Serbia is also under pressure, since the regions of South Europe and Mediterranean are expected to suffer the most. Main purpose of this study was to predict how distribution of several tree species in Serbia may change in the future.
Materials and Methods: Our study integrates climate change scenarios for the region of Serbia together with the current distribution of forest tree species. Evaluation was performed using forest aridity index which takes into account mean temperatures and sums of precipitation of the critical months during the growing season. Distribution data of the nine most abundant tree species in Serbia (European beech, Turkey oak, Sessile oak, Hungarian oak, Pedunculate oak, Norway spruce, Silver fir, Black and Scots pine) were taken from the National Forest Inventory.
Results: Significant change of bioclimatic niches is expected for the majority of the studied tree species. The most endangered will be Pedunculate oak due to the extreme change of its habitats, while drought prone species (like pines and Hungarian oak) will be less endangered. Sessile oak, Turkey oak, Silver fir, Norway spruce and European beech will be out of their 20th century bioclimatic niches before the end of 21st century according to A2 scenario.
Conclusion: Our results suggest that some of the most important tree species in Serbia (Sessile oak, Turkey oak, Silver fir, Norway spruce and European beech) will be endangered by the end of 21st century. General adaption options and specific measurements for forestry sector have to be made for the region of southeast Europe due to the expected extreme change in climate.

Change of climate conditions which are observed in past thirty years as well as climate change predictions for future, present a great challenge for forestry [1].

Globally, world’s forests influence climate through different ways and their mutual interaction is complex [2], although, interaction between forests and climate on the regional and local level is complex, climate as a global phenomenon has a stronger impact on regional forests then vice versa. Negative impacts of climate change on forests are already observed globally and in Europe [3], [4], [5], [6]. Also, in Serbia change of realized bioclimatic niches were observed [7], [8], [9], [10].

Climate change projections from the year 2000 predict a change of temperature in the range from 2 up to about 6 degrees according to different CO2 scenarios by the end of 21st century [11], [12].

By the year 2009 most of the CO2 emission scenarios from the 2000 were exceeded [13], which pointed to quite an uncertain future for the upcoming generations, as well as for forestry. According to this perspective current forest management has to be reconsidered in the following years with the aim of adapting to changed climate conditions.

Main purpose of this study was to predict how the distribution of nine tree species in Serbia (European beech, Turkey oak, Sessile oak, Hungarian oak, Pedunculate oak, Norway spruce, Silver fir, Black and Scots pine) may change in the future.

Führer et al. [14] proposed a new forest aridity index (FAI) originally designed for yield assessment that is based on the relationships between precipitations and mean monthly temperatures and proved that growth of various species is closely correlated with that index according to a formula:

where TVII, TVIII represent mean tempe-rature in July and August and PV, PVI, PVII and PVIII the sum of precipitation for May, June, July and August, respectively.

We used that relationship, the climate data and the National Forest Inventory [15] to predict future distribution of forests in Serbia. Climate data for the reference period 1961-1990 was obtained from the Republic Hydro meteorological Service of Serbia (resolution 90×90 m) while the unbiased climate data for A2 scenario was provided from the regional climate model [16] for the periods 2011-2040, 2041-2070 and 2071-2100 (resolution 25×25 km, [17]). According to A2 scenario the temperature in Serbia will rise for about 3.8 degrees by the end of century.

Calculations of FAI showed that change in bioclimatic conditions in Serbia may be considerably large (Figure 1), which could, in a long run, have an impact on the current forestry and agriculture practices. 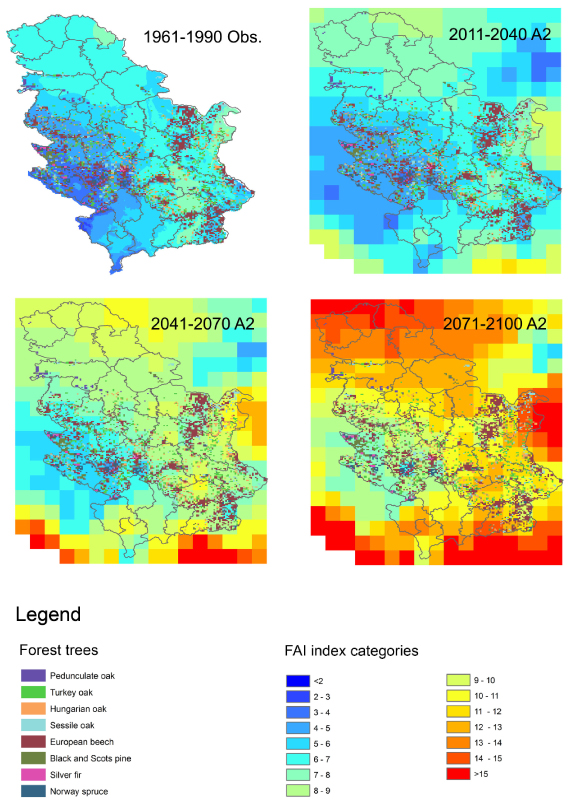 Results suggest that at the end of the century, bioclimatic conditions will be much more arid on the whole territory of Serbia.  FAI values below 10 which were present across Serbia in the reference period 1961-1990, will rise to above 15 in some parts of country by the end of the century. The bioclimatic conditions in most of the Vojvodina region in the period 2011-2040 will be equivalent to the conditions in most arid parts in North Banat.

Distribution changes have been evaluated for nine species, where Black and Scots pine are allocated in one category as it is recorded in the National Forest Inventory (Table 1). 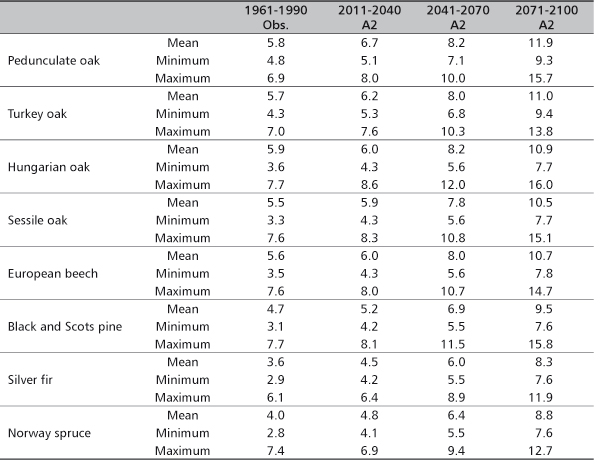 Distributions of oaks (Table 1, Figures 2, 3, 4 and 5) in the reference period 1961-1990 were within 5.5 and 7.7 of FAI values. In the period 2011-2040 the Hungarian oak will change distribution slightly, while the Pedunculate oak will show a more pronounced change. For future periods, the change of distribution for all oak species will become more drastic. 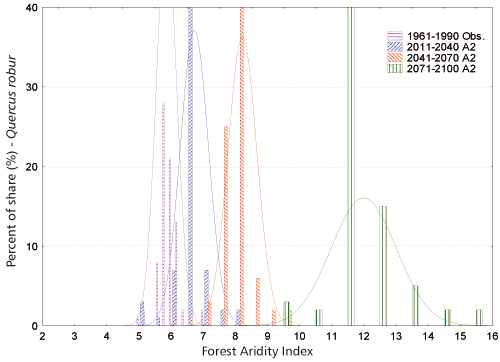 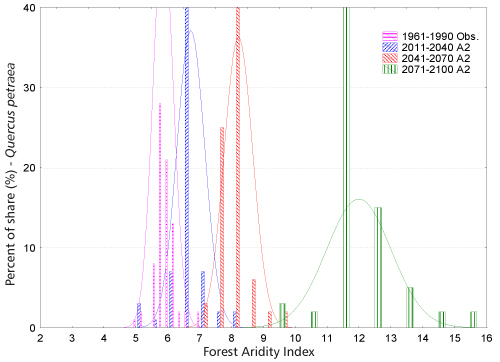 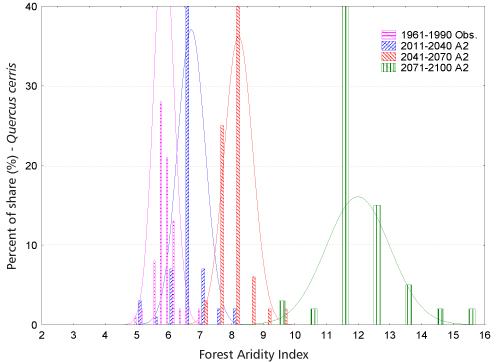 Beech forests were also taken into consideration (Table 1, Figure 6). According to A2 scenario, the near future will not be too different from the 1961-1990 period, but changes may occur when the climate becomes more arid. 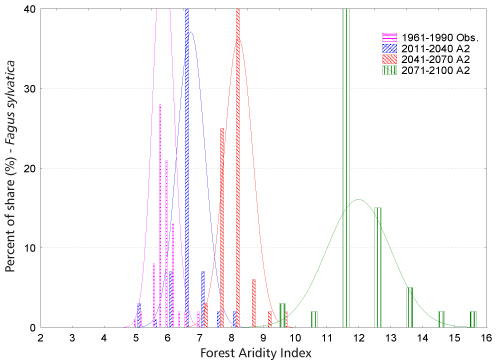 Conifer species (Table 1, Figures 7, 8 and 9) also showed variations in their future distribution as did the broadleaved species. Black pine and Scots pine, as well as other species that survive in dry habitats, will suffer the lowest change in comparison to current habitat conditions. The fact that their distribution in the 20th century partially overlaps with the end of their 21st century distribution seem encouraging for forest managers. 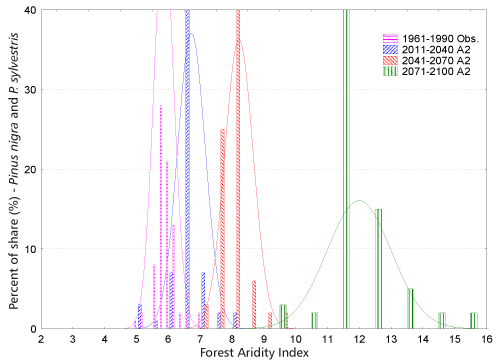 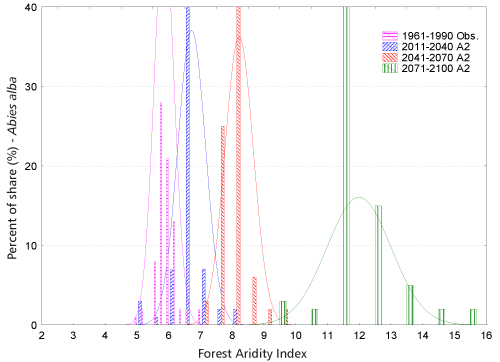 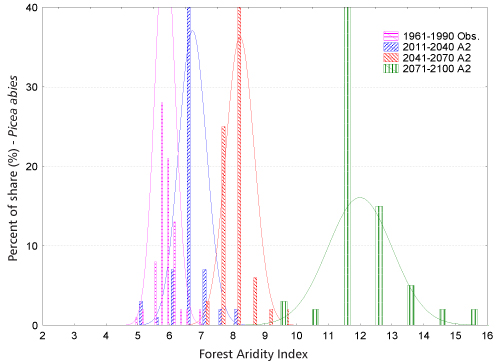 Change of Silver fir distribution will be greater than the change of Norway spruce (Table 1, Figures 8 and 9). The main reason for that is that the niche of spruce is wider in the referent period compared to the niche of fir, which is a result of its better adaptability to drought conditions.

Similar studies have been carried out in the region. Czúcz et al. [18] found that, according to various climate change scenarios, a decrease of European beech forests in Hungary by the year 2050 can be very high due to the reduction of their bioclimatic niches which are predicted to be between 56 and 99%. Móricz et al. [19] found that by the middle of century only about 35% of the current beech and 75% of the sessile oak stands will stay above their current potential distribution limit in the same country.

Stojanović et al. [9] found that by the end of century about 90% of the European beech in Serbia will be outside of their realized bioclimatic niche and that about half of the stands will be exposed to mass mortality.

Advantage of this approach in comparison to using EQ is that FAI focuses on the climate condition during the growing season.

The change in the seasonal distribution of precipitation is expected, so it can be concluded that FAI can be more sensitive than EQ for this kind of analysis.

It is expected that Pedunculate oak suffers the most from the climate change since it is dependent of groundwater which is experiencing a general decline in Serbia in past years. Additionally, it is situated in lowlands which are the most prone to aridification and temperature increase according to climate change projections [20].

According to this methodological approach, besides Pedunculate oak, Sessile oak, Turkey oak, Silver fir, Norway spruce and European beech will also totally exit their 20th century distribution before the end of the 21st century.

It can be assumed that species, such as Black and Scots pine and Hungarian oak will be the least affected by the climate change. Although some of their current stands will be found in extremely harsh climate conditions in future. It is important to stress that Black pine is more resistant to drought conditions, but these two pine species were evaluated together since they are joined in the National Forest Inventory database.

This study didn’t consider the possibility of moving the analyzed species to higher altitudes.

In order to adapt the European forestry to climate change, Lindner et al. [21] emphasized some of the most important measurements which could successfully be applied in the case of Serbia:

The most vulnerable tree species to the change of climate among the nine species with the highest abundance in Serbia is Pedunculate oak. Current distribution of species such as the Sessile oak, Turkey oak, Silver fir, Norway spruce and the European beech are under considerable risk due to the climate change, while the Black pine and Hungarian oak are the most resistant in this group.

Our methodological approach, as well as climate projections, suggests that general adaption options and specific measurements for forestry sector have to be made for the region of southeast Europe in the future.

This research was conducted  within the project “Studying climate change and its influence on the environment: impacts, adaptation and mitigation” (III 43007) financed by the Ministry of Education, Science and Technological Development of the Republic of Serbia within the framework of integrated and interdisciplinary research for the period 2011–2014.