Sustainable forest management requires reliable estimates of growing stock. Such information guides forest managers in timber evaluation as well as in the allocation of forest areas for harvest. For timber production, an estimate of growing stock is often expressed in terms of timber volume, which can be estimated from easily measurable tree dimensions. The most common procedure is to use volume equations based on relationships between stem volume and tree growth variables such as diameter and height. The reliability of volume estimates depends on the range and extent of the available sample data. In Nigeria, considerable work has been done on the development of volume equations for planted forests [1], [2], [3], [4], [5]. However, the effects of canopy layers on volume equations have not been fully investigated.

Classifications of individual trees into crown classes on the basis of their relative dominance in a stand have been made for many years. Four classes (i.e. dominant, co-dominant, intermediate and suppressed) are commonly recognized in forest ecology [6], [7]. Crown classification has been useful for predicting mortality, assessing tree vigour and rating tree resistance to certain diseases. However, for most pure plantations, the potentials of canopy layers for improving the accuracy of volume equations have not been fully explored. It has been established that when competition occurs between trees in even-aged stands or even-aged groups the trees begin to differentiate into crown classes.

A number of modeling techniques have been used for modeling stem volumes ranging from stand levels to individual tree approach. An important area that has been consistently overlooked is the fact that stem volume data are generally taken from trees growing in plots, located in different stands and of course under different canopy layers. This hierarchical structure usually results in a lack of independence between observations. This consequently results in biased estimates for the confidence interval of parameters if ordinary least squares regression techniques are used. To deal with this problem, mixed model approaches have been introduced.

Linear mixed model approach is a statistical technique generating improvements in parameter estimation. The approach has been used in many fields of study for nearly more than twenty years. However, in forestry, studies using mixed effects models are relatively recent. Lappi and Bailey [8] described the use of non-linear mixed effects growth curve based on Richards’s model. The model was fitted to predict dominant and co-dominant tree height, both at plot and individual tree levels. Gregoire et al. [9] studied linear mixed effects modeling of the covariance among repeated measurements with random plot effects. Zhang and Borders [10] used the mixed effects modeling method to estimate tree compartment biomass for intensively managed loblolly pine stands in USA. Fehrmann et al. [11] used mixed effects modeling to establish single-tree biomass equations for Norway spruce and Scots pine. Furthermore, application of linear mixed models was investigated in many other studies [e.g. 12], [e.g. 13], [e.g. 14], [e.g. 15], [e.g. 16], [e.g. 17], [e.g. 18]. Mixed effects models estimate both fixed and random parameters simultaneously for the same model. This results in consistent estimates of the fixed parameters and their standard errors. Furthermore, the inclusion of random parameters captures more variation among and within individuals or subjects.

Linear mixed models are capable of predicting random plot or tree effects unlike ordinary regression models. Hence, they are capable of yielding a more efficient prediction. Linear mixed models also allow for the explicit separation of the between and within canopy layers relationships and thus have the potentials for a correct specification of the model. The objectives of this study were to: (i) develop volume equations for Pinus caribaea Morelet (Pine) in south west Nigeria based on linear mixed modeling approach; (ii) determine and account for variance-covariance structure within individual trees; and (iii) evaluate the predictability of mixed model based on the calibration. 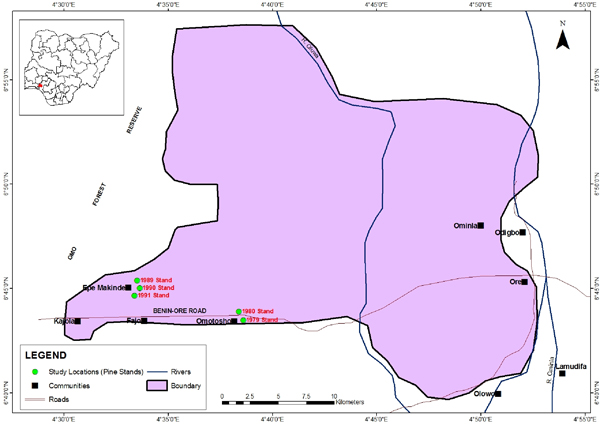 The stands were planted with initial spacing of 2 m x 3 m. There was no record of thinning in the stands. Majority of the soils in the Forest Reserve are representative of soils in the Ondo Association. These comprise of well drained, mature, red stony and gravely soils in the upper parts of the sequence, grading into the hill wash overlying original parent material or hardpan layers in the valley bottom [19]. The texture of the topsoil in the Reserve is sandy loam, which gradually becomes heavier as soil depth increases. The sub soils consist largely of clay with gravel occurring at 30-60 cm depth. According to Orwa et al. [20], Pine grows best in frost-free areas up to about 700 m altitude in more fertile sites with good subsoil drainage and annual rainfall of 2000-3000 mm. Soil requirements for Pine is usually loams or sandy loams. In some cases high amount of gravel and generally well drained soils have proved suitable. The soil ph is usually between 5.0 and 5.5. The species is rated as moderately fire resistant. It tolerates salt winds and hence may be planted near coast.

Data were collected from Pine stands established in 1979, 1980, 1989, 1990, and 1991. Five temporary sample plots of size 20 m x 20 m were randomly laid in each of the stand ages. Within each plot, tree growth variables, including diameter at breast height, base, middle and top (merchantable limit), total and merchantable heights, crown length and diameter were obtained in 2010. In addition, visual assessment of the trees within each plot was also done to classify them into four canopy layers (i.e. dominant, co-dominant, intermediate and suppressed). Individual stem volume was computed using the Newton’s formula. This is given as

TABLE 1. Summary statistics of the measured and derived variables of Pine at individual tree level

A mixed model is constructed by incorporating a random component, denoted by zu, into the conventional formula of a linear model given by y = Xβ + ε . Using a matrix notation, a linear mixed model (LMM) can be written as follows:

where Y is the vector of measurement of the study variable, Xβ is the fixed part of the model (similar to the standard linear models) such that X denotes the (n x p) observation or design matrix and β denotes the unknown (p x 1) vector of fixed intercept and slope effects of the model. Zu+ε  is the random part, where u is a (q x 1) vector of random intercept and slope effects with an assumed q-dimensional normal distribution with zero expectation and (q x q) covariance matrix denoted by G and Z is the (n x q) design matrix of the random effects. Note that the structure of the covariance matrix G is not specified. The residuals ε can be correlated and the possibly non-diagonal covariance matrix of the residuals is denoted by R. A key assumption for linear mixed model is that u and ε are normally distributed such that

where G is the variance – covariance matrix of U and R is the variance – covariance matrix ε. The variance of the response variable y is V = ZGZT + R and can be estimated by setting up the random – effects design matrix Z and by specifying covariance structure for G and R. If R is specified as a diagonal matrix, LMM only considers the random effects such as blocks which can be reflected by G. Thus, the LMM with diagonal R and a specific G is normally called as the LMM block model.

For the purpose of model prediction, it is required not only to estimate the parameters of the fixed and covariance, but also to estimate the random effects. The solutions for β and u in LMM are called the best linear unbiased predictor (BLUP). In the LMM the fixed-effect parameters, β and the covariance parameters, θ (i.e. θG and θR for the G and R, matrices, respectively) are estimated. Note that by definition, random effects are random variables. Assume that the q random effects in the ui vector follow a multivariate normal distribution, with mean of vector 0 and a variance - covariance matrix denoted by D. Usually, the maximum likelihood (ML) and restricted maximum likelihood (REML) estimation methods are commonly used to estimate these parameters. In general, ML estimation is a method of obtaining estimates of unknown parameters by optimizing a likelihood function [21]. The REML is an alternative way of estimating the covariance parameters in θ. REML is sometimes called residual maximum likelihood estimation. It is often preferred to ML estimation, because it produces unbiased estimates of covariance parameters by taking into account the loss of degree of freedom that results from estimating the fixed effects in β.

The BIC applies a greater penalty for models with parameters than does the AIC, because  the number of parameters being estimated is multiplied by the natural logarithm of n, where, n is the total number of observations used in estimation of the model. It has been suggested that no one information criterion stands apart as the best criterion to be used when selecting LMM and that more work still needs to be done in understanding the role that information criteria play in the selection of LMM [23].

In this study, a close investigation of the scatter plot of the stem volume (v) against diameter at breast height (dbh) revealed approximately a curvilinear shape. Therefore, two functional forms of tree v – dbh relationship (i.e. simple linear and exponential models) were investigated under the four canopy layers using linear mixed model approach. The model forms are as follows:

where ln is natural logarithm, β0 and β1  are regression coefficients to be estimated and ε is the model error term. Model residuals are defined as the difference between the observed and the predicted stem volume.

TABLE 2. Model fitting statistics under the two modeling approaches across the crown layers

TABLE 3. Estimates of model coefficients and standard errors (SE) of the fixed effects

The results obtained in this study have demonstrated that LMM has the capacity to improve volume equations under different canopy layers. The simple linear model approach produced better models judging from the lower values of AIC and BIC in contrast with the exponential models. This agrees with past studies [e.g. 25]. However, it is noteworthy that LMM with better fitting does not necessarily produce better model prediction [26].

Crown layer stratification has demonstrated the potentials to improve stem volume – dbh relationship. This is evident from the consistent lower standard error values in the models across the canopy layers. This finding confirms the assertions from previous studies [e.g. 27], [e.g. 28] of the existence and influence of canopy layers. The use of linear mixed models was designed to deal with the spatial heterogeneity in the data. Thus it produced more reliable estimates of fixed effects and smaller intra block variances of residuals (indicating the reduction of spatial heterogeneity in model residuals).

One area that obviously requires further study is the aspect of evaluating the influence of different covariance structure specification on the LMM with canopy stratification.