Background and Purpose: Nigeria is greatly endowed with numerous tree species of which majority of them are native while few are exotic. Report shows that high percentage of man-made forests in the country is dominated with exotic species. This culminated from the assumption that exotic trees are fast growing. However, this study investigated the growth of indigenous trees in tandem with that of exotic species with a purpose to clarify the assumption about the growth and conservation of indigenous species in natural forests.
Materials and Methods: The study was conducted at the nursery unit of the Department of Forest Resources Management, University of Ibadan, Nigeria. Five (5) different one year old tree species seedlings were used for the study. Two of the species (Tectona grandis and Gmelina arborea) are exotic while the other three species (Khaya senegalensis, Khaya grandifolia and Afzelia africana) are native to Nigeria. They were planted on the field in a completely random design and then replicated eight times. Data were collected every month on their height growth, collar diameter and leaf number. Data obtained were subsequently analyzed with ANOVA.
Results and Conclusions: Results show that K. grandifolia (45.39 cm) grew significantly better (p<0.05) in height than G. arborea (38.11 cm) and T. grandis (22.36 cm), while A. africana (40.03 cm) closely followed K. grandifolia. Based on the results, the selected indigenous species displayed promising potentials for conservation purpose. Hence, further research in this aspect is encouraged to confirm the findings.

Forest resources are renewable natural resources and Nigeria as a nation is copiously gifted with these resources [1]. Of all the forest resources, trees have been categorized as the major produce based on the high economic value generated from them. Ecologically, trees can be further classified into indigenous and exotic taxon. A tree species is regarded as native or indigenous to a given region or ecosystem if its presence in that region is the result of natural processes, with no human intervention. Every natural organism  has its own natural range of distribution in which it is regarded as native. There are numerous indigenous tree species in Nigeria that have equivalent timber quality or better timber quality than the exotic species [1]. These include Milicia excelsa, Entandrophragma spp. Khaya senegalensis, Khaya grandifolia Mansonia altissima, Albizia zygia, Afzelia africana, etc.

Exotic tree species on the other hand is a species living outside its native distributional range, which has arrived there by human activity, either deliberately or accidentally. There are various economic tree species that are exotic to Nigeria, but the two widely known and cultivated species are Tectona grandis and Gmelina arborea. In other words, these two species dominate various forest plantations in Nigeria [2-4]. However, majority of these plantations are monospecific, which is ecologically detrimental to the environmental balance of forest biodiversity. Additionally, reports have revealed that some exotic tree species have tremendous damaging impact on the indigenous trees as well as other natural resources in the forest or the ecosystem. For instance, they cause decline in abundance, contraction of geographic ranges, and extinction of native species [5-7]. According to Nwoboshi [8], Tectona grandis does not support the growth of some indigenous trees because of its allelopathic nature.  In other words, where T. grandis is grown, economic indigenous tree species like Mansonia altissima, Ricinodendron heudelotii, and Albizia zygia cannot survive [8]. Apart from the environmental issues caused by exotic species, there are also problems of meeting the livelihood and cultural needs of the local communities that depend on forest products and services [9]. For instance, a study [1] has shown that parts of indigenous tree species are used by masquerades as paraphernalia during cultural festival in some villages in southwestern Nigeria. In this case, exotic tree species cannot be used as surrogates for indigenous species. In addition, it is interesting to know that Gmelina arborea, which has been formally categorized as less known species is being utilized for our major forest restoration in Nigeria.
The species was originally introduced to Nigeria for pulping purpose. As a result of the fact that it overgrew the stage of its utilization for pulp and paper in tandem with unavailability of better indigenous timber species in the natural forest, it is now being utilized for timber purpose.

There are studies [11-12] which have assessed the early growth of some trees in Nigeria, but none has been able to simultaneously study the growth of indigenous and exotic trees. For instance, Gbadamosi et al. [11] studied the effect of four provenances on early seedling growth of Parkia biglobosa and discovered the provenance of Ibadan to have the best growth. They recommended that the seed of the species should be sourced from Ibadan if its plantation is to be established. According to Mohammed et al. [12], height growth of Balanites aegyptiaca can be very slow at the seedlings stage, but at the saplings stage, the growth rate increases drastically. This paper therefore investigated the early growth of selected indigenous trees in tandem with that of exotic species with a purpose to clarify the assumption about the growth and conservation of indigenous species in natural forests.

This study was embarked upon at the nursery unit of the Department of Forest Resources Management, University of Ibadan. The site is located approximately on latitude 07o26.981’N and longitude 0003o53.733’E. It is at an altitude of 277 m above sea level [8]. The annual rainfall of the area is 1258 mm - 1437 mm with mean daily temperature ranges from 22oC - 31oC and the soil of the area is ferric luvisols [8].

Five tree species were used for the study. Two species (Tectona grandis and Gmelina arborea) are exotic while the remaining three species; namely Khaya senegalensis, Khaya grandifolia and Afzelia africana are native to Nigeria. The exotic species were selected for this study due to their high rate of utilization while the native ones were used because they are severely threatened and almost extinct in Nigeria.

The seedlings used for this study, which were a year old, were obtained from the Department of Forest Resources Management Nursery. Each tree species was replicated eight times in a completely random design and planted on the area of
1 m x 1 m on the field. However, the same envi-ronmental treatments were imposed on the tree species. In other words, they were all left to experience the real natural conditions on the field.

Data were collected every month in the period of six months on their height growth, collar diameter and leaf number. Height growth measurement was achieved by taking the vertical distance from the ground level to the tip of each tree using a long meter. Collar diameter was obtained by measuring the diameter at the collar point of the trees with the use of a vernier caliper while number of leaves on each tree was obtained by visual counting. Statistical analysis was carried out using a one way analysis of variance (ANOVA). Duncan Multiple range test was used for post hoc analysis.

Results (Figure 1) show that after a month of assessment, G. arborea increased in height for 7.03 cm and was the highest of all the species. It was followed by K. grandifolia (2.76 cm), A. africana (1.49 cm), K. senegalensis (1.23 cm) and T. grandis (0.7 cm), which had the least height growth. The growth followed a similar pattern from the first month to the 4th month G. arborea having the highest height growth while the least was recorded in T. grandis all throughout this period. However, at the 5th month, the growth pattern changed. 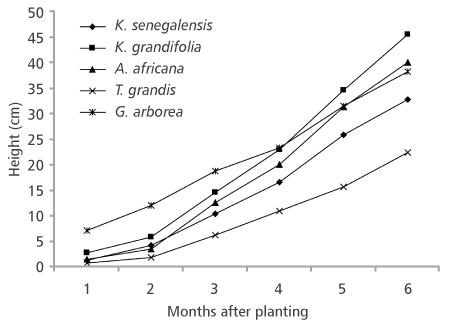 FIGURE 1. Height growth of the species after six months

K. grandifolia overtook all other species in its height growth as it measured 34.49 cm while G. arborea measured 31.54 cm, A. africana (31.33 cm), K. senegalensis (25.90 cm) and T. grandis (15.70 cm). At the final assessment of the height growth, K. grandifolia still had the highest cumulative height increment of about 45 cm; it was closely followed by A. africana (40.03 cm), while the species that had the least growth rate was T. grandis, with just 22.36 cm of height growth after six months. Table 1 shows that height increment differs significantly (p<0.05) among the species.

TABLE 1. Increase in height, collar diameter and number of leaf of tree saplings 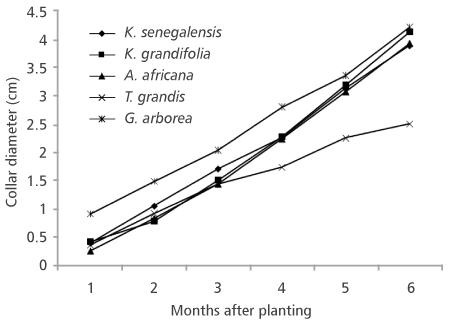 FIGURE 2. Collar diameter growth of the species after six months

During the assessment of leaf number over the period of the experiment (Table 1), K. grandifolia (26.7) has showed the highest leaf production compared to other species. The species that followed K. grandifolia was K. senegalensis (21.2), A. africana (19.0), and T. grandis (13.8) having the least number of leaves. Hence, statistical variation of the leaves produced amongst all the species showed a significant result (p<0.05). The periodic change in the number of leaves from the first to sixth month of the experiment is shown in Figure 3. 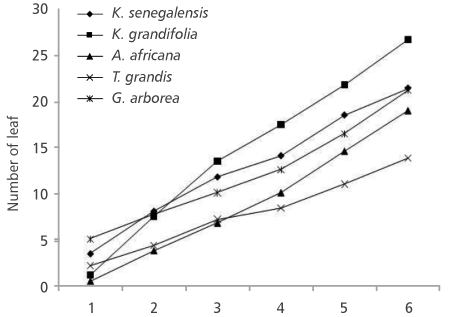 FIGURE 3. Number of leaf of the tree species after six months

The significant differences observed in the growth of the five tree species suggest that their level of adaptation to the same environmental conditions is more or less different. This may be ascribed to the combined effect of the environment and the inherent characteristics of the trees, which determines their physiognomy. The relatively better collar diameter growth rate observed in G. arborea than all other species at the initial stage may be due to its fast ability to transform photosynthate to growth at a seedlings’ age [6, 13]. This finding is in consonance with Mohammed et al. [12], who discovered that some trees can be very slow in growth at their tender age, but the rate of growth increases as they transcend to saplings age.

Generally, the sampled exotic species flourished and grew more rapidly at the initial period of assessment of the seedlings. As reported by some authors [13-15], these species are more favored to be used for plantation planting materials than our indigenous trees. However, in later stages, the indigenous species proved to have a better height and diameter increment than exotic species. Consequently, the findings of this study are in contrast to those of Gardner [16] and Zuidema et al. [17], who emphasized that exotic species performed better in growth compared to native species. For instance, Sarrailh and Ayrault, [8] stated that, with respect to tree height growth, exotic species (E. grandis and A. saligna) performed better than indigenous species (A. polyacantha and B. thonningii) amongst all the species they experimented with and as such, concluded this has culminated with the fact that exotic species have been preferred because of their high growth rate. Interestingly, their study did not involve the sapling stage of the species but rather examined only the seedling stage. Conversely, this study agrees with Olukoye et al. [18], who recorded that exotic tree and shrub species showed a poorer performance in relation to indigenous species.

The study has been able to compare the growth rate of the exotic and the indigenous species up to the age of a year and half. The three indigenous species appeared promising. This is based on the fact that K. grandifolia grows better, both in height and diameter, at the saplings’ age than the two most popularly known and propagated exotic species in Nigeria (i.e. G. arborea and T. grandis). However, further research is needed to ascertain this finding. In as much as this study is a preliminary study, further research in this regards can therefore focus more on the simultaneous growth of these at an older age. When this is achieved, ecologist and other tree growers as well as the tree planters will be encouraged to utilize them for the reforestation and afforestation in order to improve our degraded forests rather than using the exotic species. Hence, the threatened conservation status of the indigenous species in the natural forest would be ameliorated.